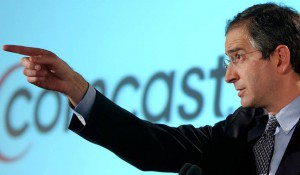 Comcast customer service is supposed to be improving.  When Brian Roberts took over as CEO of cable giant Comcast a year ago, he pledged to improve their notoriously poor customer service. He, and EVP Neil Smit said they were taking action.

Well, a year has gone by, and if one looks at the business metrics, it would appear that Comcast customer service has made progress.

But when Mr. Roberts was interviewed by Henry Blodget a few weeks ago, there was a bit of a mixed message.  On the one hand, he is still saying good things – like “every executive, including myself, needs to be trained on customer service .”  On the other hand, there are a few indications that their focus still needs to be at another level.

Rather than aiming high – to actually transform Comcast into a world-class customer service organization –  Mr. Roberts appears to be beginning to rationalize their performance.   He suggested that Comcast is really no worse than it’s competitors, and hints that consumers are spoiled by all the free services they receive these days from organizations like Google and Facebook.  And, while he talks about some significant improvements in processes, he hasn’t presented the people side of customer service as a priority.

A year ago, in this blog, I had outlined what Comcast would have to do to achieve their goals. They’ve done a few things, but until they create an employee culture that values customer satisfaction more than anything else, they won’t be able to nearly achieve their potential.