Today we went to Moorea, the small island 15 kilometers or so from Tahiti.  We weren’t able to get an excursion through Princess – they were all sold out – so we went in on the tender and found a delightful driver who gave us a terrific tour of the island. We stopped many times during the drive – sometimes for photo-ops, and sometimes so we could go in and perhaps spend some money at a business owned by one of her friends and family.

After four hours, we had circumnavigated the island, visited the “juice” factory, a couple of amazing plantations, and three or four places that sold black pearls, and seen vistas that were heart-stopping. This is truly paradise.

The people of Moorea are absolutely delightful. The Polynesians have a culture to their own. A little influence from the French, of course, but I’m not sure I have been to a place where people seem just so…happy.  The happiness/friendliness comes through in the customer service; so the combination of that, and the Eden-like beauty of the island, and one would have to wonder why they ever agreed to leave.

The customer experience with Princess Cruise Lines is not nearly so complete. Don’t get me wrong, it’s not bad, it’s just…well…maybe ‘stale’ is the right word.  Let me see if I can explain:

The concept of cruising is solid – but I have a sneaking suspicion that they haven’t updated their format, or revisited their approach to customers in any serious fashion in a long time. When you look at the four elements of customer experience: Policies, Processes, People and Practices, they seem to have a lot nailed down. But customer experience, particularly when you are billing yourself in a luxury class, is all about little things. And it is the little things where Princess falls down – little things that can easily be fixed.  They all, ultimately, fall into the realm of “People” – those things that employees do or say that impact customer experience.  It’s all about the Six Pillars of Customer Service, and how employees are trained and supervised. Here are a few examples of little things they have lost sight of:

The security staff have an important role. They need to protect the safety of the passengers, and enforce maritime law, and the law of the countries that a ship visits. Because of this, a great many of them – perhaps most of them – take themselves Very Seriously indeed. No smiling, no talking – all business. It is a stark, and unnecessary contrast to the rest of the crew who are all so customer focused.  I say unnecessary because it just doesn’t have to be that way.  Security doesn’t have to mean unpleasant or unfriendly.  Just check out my recent post about TSA in LA.

Maybe the best metaphor I’ve ever heard about the role of security in a customer focused environment came from Michael Moira, CEO of Nassau’s Arawak Port Development company.  He understands how critical security can be, but says the role is best conducted as “a friendly neighbourhood cop.” Someone who gets along with everyone, but is constantly on the lookout.

This morning we booked an excursion for our visit to Bora Bora tomorrow. We were the last people to visit the excursion booth before they close down for the afternoon. When they reopened at around 5, we went back to cancel the excursion. We had discovered in Moorea that we could have a terrific experience – just like the Princess excursions at less than half the price. All we had to do was book it ourselves with a local business person when we got to shore.

The first response from the person was to say “no”, and she began to spout off the rules and regulations of excursions. We had to cancel within 48 hours, we were told. She was unfazed when my friend pointed out that, to do this, we would have had to cancel the excursion before we had actually booked it. She was adamant. Ultimately, she ended up saying, “well, I can take the tickets back and see if I can resell them,” but that wasn’t until after things had become a little heated. And, ultimately, she did manage to resell them. It was all very uncomfortable. There were two things that could have prevented this:

a) Princess could stop being greedy

There’s a saying business people use when trying to figure out how to price their products or services: “Pigs get fed, Hogs get slaughtered” The point is that you want to make as much money as you can on something, but if when you start to get greedy, it comes back to bite you. Princess, and other cruise lines, have become exceedingly greedy with in-country vendors – demanding large percentages of the revenue, and marking things up accordingly. They have created a situation where it makes no sense to really use a cruise line excursion. If they had been more reasonable, we wouldn’t even have considered cancelling.

b) The employee could have been more skilled

She just really didn’t handle it well. There are better and worse ways to deal with difficult situations.  She chose the worse way.  This is just a training issue

Overall, the facilities are great. But on the top deck, they have a place for hitting golf balls into a net. Beside the net are four broken whiffle-balls, and five ancient, rusted clubs – all left handed.  Really?  Really?  This is a case of none of the staff taking enough ownership to say, “Hey, this is really dumb – we should fix it…”  Again, this is a training and supervision thing.

Tomorrow we are off to Bora Bora. Very excited – stay tuned!

The Single Most Important Customer Service Skill You Can Have

Now is the time for America to fight their banks

How many customers can you afford to lose? 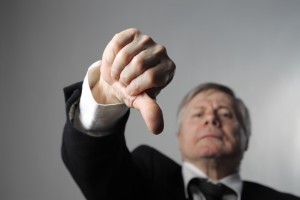 If A 4-Year-Old Can Get Call Centre Customer Service Right, Why Can’t Everyone Else? So, You Have a Hysterical Customer…