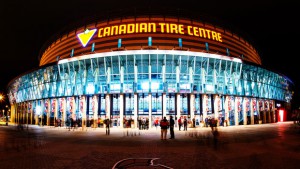 There are many people who will try and tell you that we, as individuals, don’t really have the power to create WOW Customer experiences. You hear this particularly often in large organizations.  “I’m just a small cog in a giant machine,” they’ll say. “Nothing that I do will make much of a difference.”

Well, Whatever you do, don’t tell that to Larry.

Larry works at the Canadian Tire Centre, home of the Ottawa Senators NHL hockey team and countless large events every year.  He’s one of maybe a thousand employees, and in a role that one might not normally associate with WOW experiences.  His job is to man the centre booth in parking lot 4, collecting payment from the thousands of cars that stream into the lot before every event.  And it seems there are a lot of people talking about him.

I’ve never actually met Larry (although it’s now on my bucket list).  I don’t know anything about him – what he looks like, sounds like, if he’s older or younger – nothing.  But just with the things I’ve heard about him, he might be the first person I hire when I start my own NHL hockey team.

I learned about Larry while conducting a focus group with a small group of Ottawa Senators season-ticket holders.  We were exploring all of the ‘touchpoints’ where the organization and its customers interact.  (The Senators organization is fanatical about customer satisfaction, and is continuously looking for ways to improve the experience of the people who attend games and events.)

To be honest, when the topic switched to ‘parking,’ I wasn’t expecting any surprises.  I knew there would be pointed thoughts around how long it takes to exit at the end of an event – the inevitable reality of +/-8,000 vehicles all trying to move at once. But beyond that, I wasn’t anticipating much discussion, much less hearing about WOW customer experience.

“It’s like the best party in the world is happening right there in his wicket!”

My surprise came when I asked the question, “What are your expectations of someone who works in the parking booths?”  Instead of just a few vague comments, one woman instantly chimed in with, “Well, I’m not sure what my expectations are, but wish they were all like Larry!”  The eyes of three other people in the room lit up as they nodded in agreement.

“Parking lot 4, centre booth!” one man across from me confirmed with a big smile on his face.  “I always go into his lane, even if the line-ups are shorter in the other lanes.”  More nods around the room.

When I asked the group what Larry was doing to stand out so much, the woman who initially brought up his name said, “I don’t know.  All I know is that you get the feeling like the best party in the world is happening right there in his wicket!”  The others used words and phrases like,”always happy,” “cheerful,” “makes you smile every time,” and so on.

Wow.  So much for “I can’t make much of a difference.”

Imagine the cumulative difference if every single person in your organization approached their jobs the way Larry does. Imagine how loud the positive conversation would become. Imagine how much fun it would be to show up for work every day.

As I mentioned, I’ve never met Larry.  But I’m willing to bet that there are three things about him that make him stand out:

So here’s the big question:  Do you approach your job the same way?

“There’s the age old question, ‘Do you work to live, or live to work?’  My question, however, is, ‘why not live while you’re at work?'” – Shaun Belding: Win at Work: navigate the nasties, get things done and get ahead

Shaun Belding is CEO of The Belding Group of Companies, and speaks globally on customer service, customer experience and creating positive workplaces

Three outstanding workshops that will: